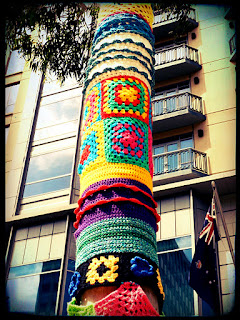 Part of my contribution to the project

Not long after Yarn Corner had formed last year, and we'd been bitten by the bug of yarn bombing in groups and how fun it can be and how much you can get done, we were sitting around at a cafe and someone had the idea of doing a tree, but I wanted to go further and do lots of trees! I wanted IMPACT! So why couldn't we yarn bomb all the trees in City Square? Surely it couldn't be that hard? Oh my, I had no idea! 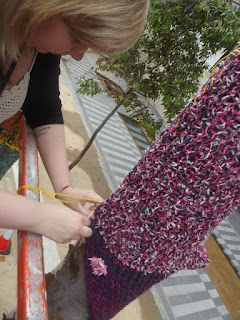 That's me sewing up the first tree. You wouldn't think from this angle, but I'm seriously high up! 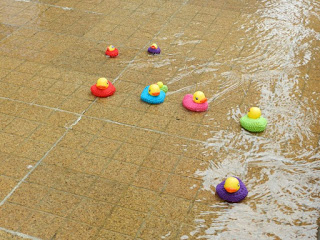 I think ducks might be becoming my signature yarn bomb as everyone loved them last year and they were a hit again this year.

6 months in the making became Yarn Corner Stitches Up City Square. It was about 4 months of asking the City of Melbourne Council if this type of idea was even possible and waiting for them to go to different departments to get permission for a whole range of things. Then submitting examples of other trees that had been yarn bombed and how they weren't damaged. And a meeting with the Tree Planning department about their Urban Forest Strategy. Then a mountain of paperwork to get through, and all this was even before they accepted our proposal! Then of course we had to find yarn bombers that were interested in our project.
When we realised just how much yarn we were going to need and how much money it would take to put on such a massive event, I knew we would need sponsorship. So I sent emails around to yarn stores/suppliers and to my surprise the donations came flooding in! Lots of yarn donations, but the one that took the cake was $15,000 worth of yarn from a very small family run business in Coburg called Yarn Barn. We were over the moon! 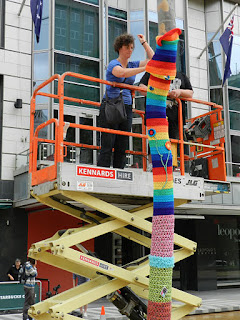 We had to hire a scissor lift so that we could get to the tops of the trees as they were so high!
Nice job Grace! 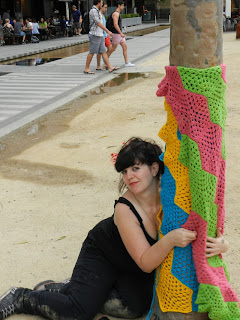 While it was nice to get yarn donations we knew we needed money aswell. Australian Country Spinners came on board with $1200 and combined with some fundraising between YC members, we managed to get what we needed for the installation day and workshop day. 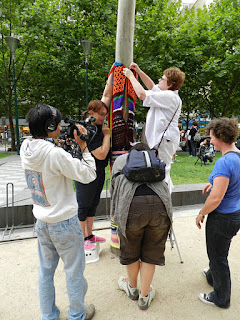 We've had a small film crew running around after us for a few weeks now, filming how we've put together this event.
That's Louis our camera man, Tracy, Jacqui, Lyndel and Grace working on tree 11. 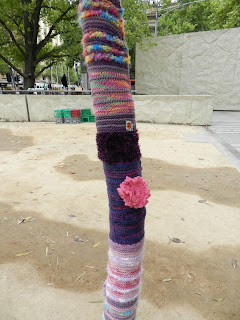 Everyone had such different pieces. Our only theme/color guide was that it had to be rainbow - but rainbow means something different to everyone. This is Lyndel's tree.

Installation Day came and went with out too much trouble. We had more than enough material [too much in actual fact] and helping hands. We got done an hour before the scissor lift needed to be picked up. And apart from a few burnt noses [it's Summer in Australia] we all did really well. I was so proud of everyone pitching in together to get such a large event installed. 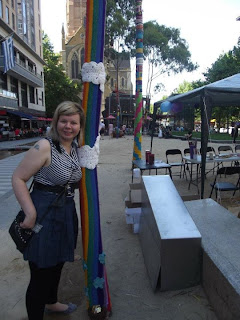 Me mucking around in front of Jaguar's tree with the cute clouds and pot of gold. 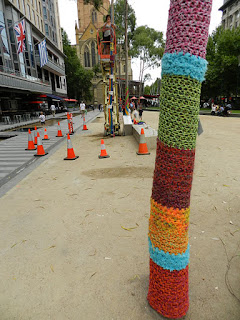 Yarn Corner is made up of 207 members worldwide. This tree piece was done by Stacie from Yarn Revolt in the US who has been a part of every YC project so far even though she lives a world away.

The next day was the workshop day where we held classes for Kids Learn To Knit, [Adults] Learn To Knit, Learn To Crochet and Learn To Yarn Bomb. The lovely Andrea from CCCK yarn store came down to help with the workshops and Spotlight kindly provided the contents needed for the Learn To Yarn Bomb kits. [If you are interested in a kit, then we have some left. You need to join Yarn Corner on facebook - search under facebook groups - and reserve your kit.] 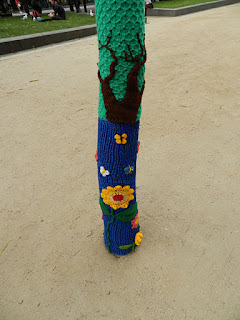 Again, it's interesting to see what kind of pieces people came up with. That's Grace's on the bottom and Katie's on the top. 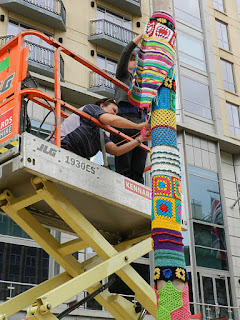 Back up on the lift. I think we overestimated exactly how much material we would end up with. I guess we were all eager to yarn bomb!

Sunday morning we also had a photo shoot for Moreland Leader who continue to support Yarn Corner and our yarn bombing efforts. 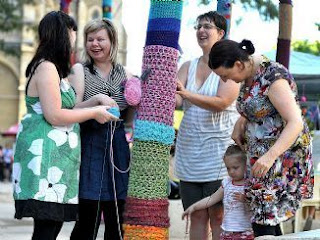 Overall this event has been a resounding success and I'm extremely proud of all the Yarn Corner members and what we've managed to do.

2012 for Twilight Taggers and Yarn Corner 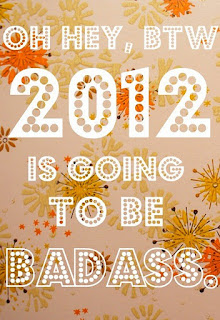 So... 24 days into the New Year and I finally have a moment to sit down, rearrange the blog and post something worthy of reading. This year I will try to update this thing more often than I did last year.

Things got very busy very quickly after International Yarn Bombing Day and the formation of Yarn Corner. To date, in less than 8 months, we went from starting the group with 3 whole people, to 207 members from all over the world! I just wanted a stitch and bitch group for yarn bombers in Melbourne. I had no idea what was in store for me. I didn't know that I would end up working 4 days with 10 hour shifts at my "professional job", so it meant I have three days off a week to manage YC. I didn't think that we'd be needing four admins to make sure YC ran smoothly. And I certainly didn't think we'd be pulling off such amazing projects like we have so far. Every day I'm pleasantly surprised by how well the group is doing, the recognition it's getting but mostly how much fun everyone is having with their yarn bombing.

My own yarn bombing works [Twilight Taggers] got put on the back foot while we were establishing Yarn Corner but in February I'll be taking holidays from work and traveling to Sydney and Brisbane to do some personal yarn bombing for an event I'm calling the East Coast Yarn Storm. You'll be able to follow my progress here on my blog or on my Twilight Taggers facebook here: http://www.facebook.com/twilighttaggers and you can see the event details here: http://www.facebook.com/events/208579362554405/ .

Luv Bali.
Posted by Twilight Taggers at 17:07 No comments: Not long to go people! And Yarn Corner will have all the trees in City Square covered in yarn bombing.

Make sure you get in quick for a place at one of the free workshops by emailing me at twilighttaggers@gmail.com. All materials supplied. We will also have Learn To Yarn Bomb kits for give aways.

The installation will be up for one month.

Make sure you get on down for a look.
Posted by Twilight Taggers at 00:49 1 comment:

How To Guide on Yarn Bombing [revised edition] 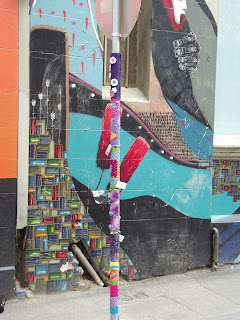 Today I finally got around to revising my HOW TO GUIDE ON YARN BOMBING. The original one I wrote quite a long time ago. So now I've tidied it up and it's all good to go. I even made it into a PDF. Feel free to distribute it as you wish, or post links back to here.

Click on this link and it will take you to the PDF.
http://freepdfhosting.com/b3a876cdf8.pdf
[Please note the website that I have the PDF uploaded at only keeps uploads for 30 days. So if the link doesn't work please email me [twilighttaggers@gmail.com] and I'll upload it again.]